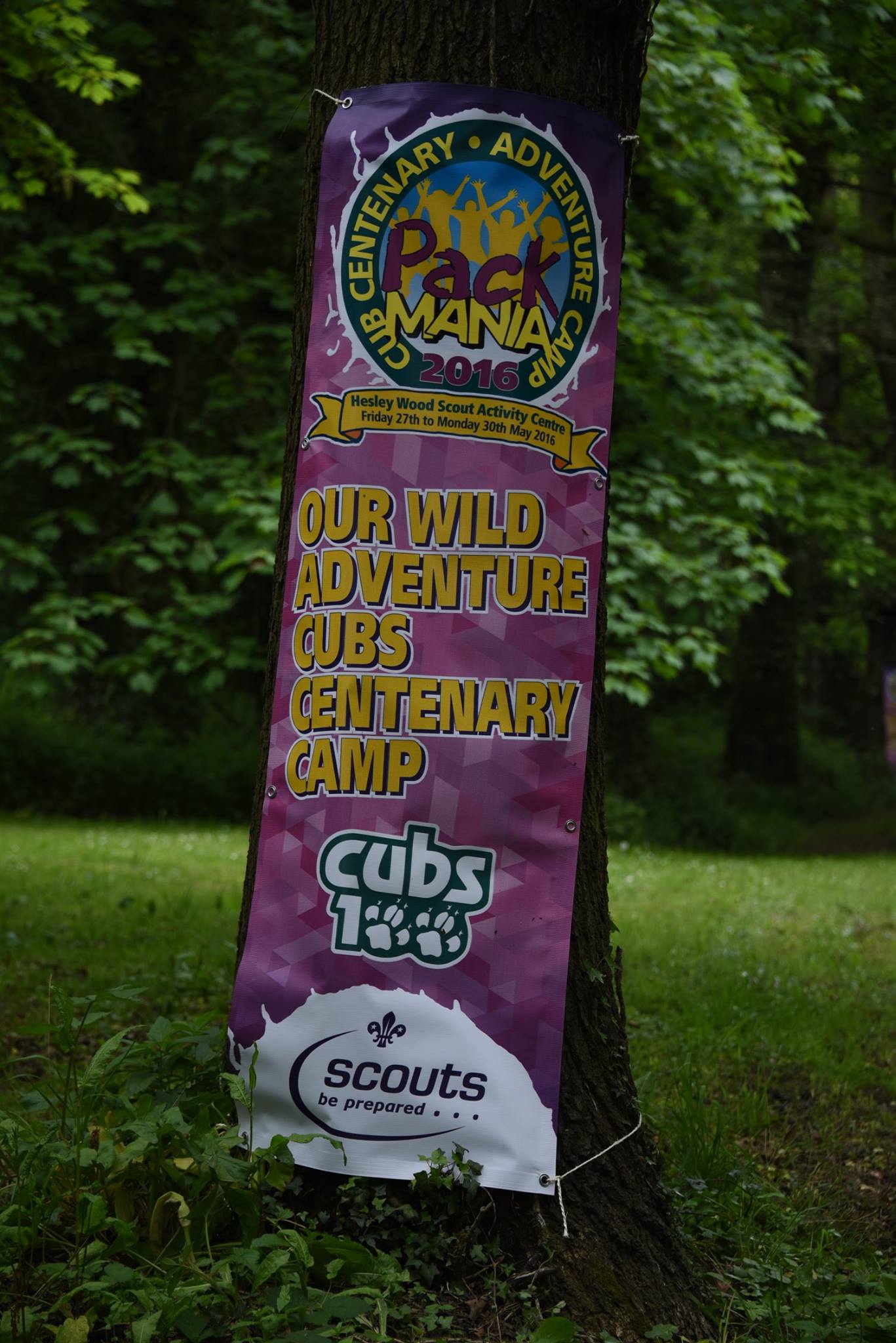 The Notifications Officer and Ralph's packed weekend at Packmania 2016!

On Friday 27th May I was told to pack a bag and that I would be going away with the Notifications Officer, Vicky, to Packmania at Hesley Wood Campsite. Legend has it that Hesley Wood Campsite is the famous site where Sheffield Birthday Rally was held in 2013, and Vicky was keen to explain to me her (what turned out to be lack of) knowledge of the site on the way there. Packmania was a Central and South Yorkshire Cub Scout Event to celebrate the 100th Birthday of Cubs! I found this amusing considering Vicky possesses several ‘Guide with Pride T-Shirts’….

Friday night was very exciting as there was a funfair. The Cubs loved it, I was in awe of their ability to go on rides again and again and again; even the Cub who I helped stop crying on the coach found it exciting! I found it very overwhelming, so Vicky gave me a guided tour of the site, which included her finding things which she hadn’t seen on Sheffield Rally; the site is a mile +  long….We enjoyed a wander around and tasted some funfair chips before late night Spag Bol!

Saturday morning dawned bright and misty. Vicky found her role in helping serve breakfast to the Cubs; fuelled on Peppermint Tea, I observed her speedily serving Cocoa Pops to 8 cubs a minute. I was very impressed. However, she would impress me further when she took me to the opening ceremony and I got a birds-eye view from the very back which meant I heard NOTHING.. Sarcasm to be inserted here. Note for mascots: sit near the front. By this point I was beginning to wonder what on earth this weekend would give me to enjoy next. Vicky, sensing my disappointment, promoted me to ‘Chief Observer of the Food’. To put it simply, she regressed to Lancaster Rally 2015 and started to make 200 sandwiches for dinner and I was left in charge of guarding the food outside…. I promise I didn’t eat any of it! The rest of Saturday was taken up with sunbathing and watching Vicky and the rest of the team frying up 448 camp donuts’ for the Cub’s- Vicky even served the Mayor and Mayoress of Doncaster! However, I did sneak out and bounce on the inflatables, take part in crate stacking, kayaked on a lake and go caving, even if I was VERY tired after my important training in food observing. Saturday night was the outdoor cinema showing the Jungle Book- who knew that monkeys could sing and dance?! It was brilliant!!

Sunday dawned misty and bright. Sadly Vicky was asked to peel and chop potatoes (echoes of Lancaster Rally anyone?!) but perked up when it was the ‘Big Blowout’ when we broke the world record for the number of candles blown out in one go- 1552 smashed the 841 record! I was very impressed! Later on, there was a Colour Run which I declared I would not go near due to the delicate nature of my fur. Vicky, on the other hand, went through it and came back sporting an orange and blue white t-shirt; if this is the latest fashion I really hope the rest of the SSAGO Exec take part! That said, it was a lovely evening and was amusing seeing the smoke coming from the trees from my beautifully located seat away from the action.

Apparently the last day of camp is always really sad, I found myself evicted from the tent and into Vicky’s rucksack. The tent was taken away and we were left in a field- I was not a happy reindeer. Vicky, having obviously enjoyed making 200+ sandwiches on Saturday, decided that making them AGAIN would be the best way to end her weekend away. Cue 97 Jam sandwiches,60 Cheese, 19 Ham, 30 Turkey… Add in 200 portions of beautifully arranged angel delight, she really is the next Delia Smith! The closing ceremony featured songs like ‘Saturday Night’ and ‘Macrena’ which confused me as it was Monday afternoon- anyone else have that problem? Either way, the luminous hoodie was out, Vicky and many others were dancing and I enjoyed looking at all the different Cubs from across Yorkshire having a good time!

What did I learn this weekend? That the Notifications Officer is a right laugh, you cannot lose this year’s Exec with their bright hoodies, Cubs are not as scary as they sound, that turning 100 means you get a massive party, and being a SSAGO mascot is truly special. Thanks to Central and South Yorkshire Scouts for a great weekend and role on Wetherby District Scout Camp in July- Vicky doesn’t know she is going yet!